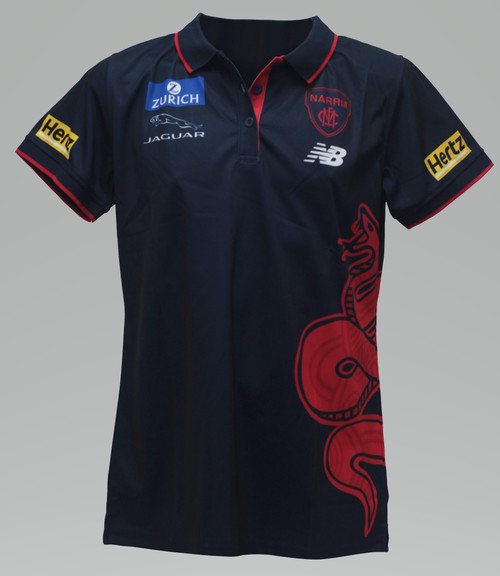 Please note this item is 100% Polyester. This is a fully sublimated garment.

As part of the 2022 AFL Sir Doug Nicholls Round and AFLW Indigenous Round celebrations, the ‘Melbourne Football Club’ will take on the name ‘Narrm Football Club’. This initiative is designed to acknowledge and educate on Australia’s Indigenous history, while encouraging productive conversations within Melbourne Football Club’s member and supporter base, as well as the wider football community. The club has consulted with Wurundjeri Woiwurrung Cultural Heritage Aboriginal Corporation who have provided invaluable knowledge and permission for the club to use the Woiwurrung word and bring the initiative to life. Narrm is the traditional Aboriginal name for Melbourne. It encompasses the traditional lands of the Kulin Nation, which consists of a collective of five Aboriginal nations; the Wurundjeri, Boonwurrung, Wathaurrung, Taungurung and Dja Dja Wurrung. Melbourne Football Club’s spiritual home of the MCG is on traditional Wurundjeri land, and is within the broader area traditionally known as Narrm. ‘Narrm’ comes from Woiwurrung – the language spoken by the traditional owners of Melbourne and its surrounds. As the name ‘Narrm’ is being translated from oral language, there are several variations of the spelling. Narrm, Naarm and Nairm are all commonly used and accepted. This limited edition range will support the clubs various indigenous programs.