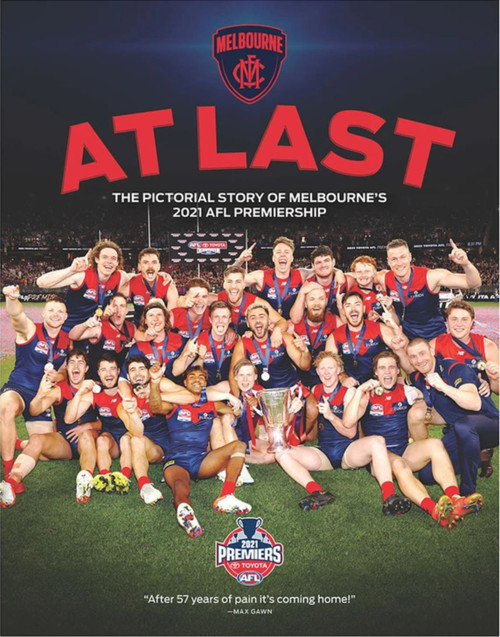 At Last! Is a beautiful commemorative keepsake for Melbourne Football Club fans, using stunning images from AFL Media’s photographers to tell the story of the Melbourne’s 2021 AFL Premiership triumph.   Melbourne’s 2021 AFL premiership ended one of the longest droughts in the game’s history. It had been 57 long years since Norm Smith’s Demons had triumphed over Collingwood at the MCG. But the 2021 team, under coach Simon Goodwin, was having none of the history, as it dominated the season, never leaving the top four. Such success carried through the finals, with crushing wins over the Brisbane Lions and Geelong on the way to a historic Grand Final in Perth, only the second time in the game’s history the decider has been played outside Victoria. When Melbourne trailed by 19 points midway through the third quarter, it looked as though the club’s run of failures would continue, but, like magic, the game was spun on its head as the Demons kicked 16 of the last 17 goals to run out sensational and emotional winners. The curse was over: at last! A new era beckons. Tracking the highs, lows and thrilling conclusion to the winning team’s dream run to the Premiership dais, At Last! captures the defining moments of the season, from the first ragged sprints of pre-season training to the giddy highs of a remarkable finals series – all culminating in the colour and excitement of the great day in September. This book is a beautiful keepsake that will take pride of place on the bookshelves of club loyalists, and serve as a lasting memento of a dream season and a 57 year drought broken.