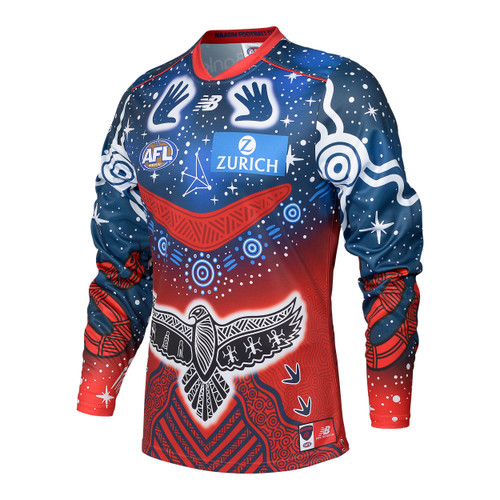 The guernsey, which was designed by Wurundjeri/Dja Dja Wurrung artist Ky-ya Nicholson Ward and produced by New Balance, will proudly be worn during the 2022 AFL Sir Doug Nicholls Round, as well as next season’s AFLW Indigenous Round.

At the core of the design sits Bunjil, Wurundjeri’s creator spirit, which is represented in the form of a wedge-tailed eagle.

Bunjil, regarded to have created all living things, is depicted above the flowing Birrarung (Yarra River) – a feature of Narrm (Melbourne) that holds great significance to Wurundjeri people.

Alongside the Birrarung, Boorimul (emu) footprints are featured to represent the future. As Boorimul can only walk forwards, the footprints highlight a journey and the notion of all at the club moving towards a positive future, together.

The creator spirit extends to the stars, which are prominent on the top half of the jumper, with Bunjil’s Constellation, also known as the Star Altair, included to give further strength to the Demons’ AFL and AFLW players.

The MCG, being Melbourne’s AFL home ground, is also represented with a meeting place symbol.

Sitting underneath the boomerang, the meeting place symbol speaks to all people coming together, regardless of background, for one purpose and signifies a sacred ceremonial ground for Wurundjeri people.

The celestial hand rounds out the front of the design, symbolic of Aboriginal and Torres Strait Islander ancestors.

On the back of the jumper, all Indigenous players who have played for the club at VFL/AFL or AFLW level are acknowledged, including Steven May, Kysaiah Pickett, Toby Bedford, Deakyn Smith and Krstel Petrevski, who are part of Melbourne’s current lists.

Mindi, which is known as a devil snake in Wurundjeri culture, sits at the base and echoes the Melbourne Demons’ nickname.